Today we filmed with our resident trick-trainer (and extremely hard-working editor) Sally Rowe, who talks us through the various steps to training your dog to go to a mark.  Big thanks to Katie Mardell who kindly brought her lively collie 'Poppy' down to the hall for filming
Posted by Naturally Happy Dogs at 17:33 0 comments

Today we headed down to film with Karen Lawe from the Deaf Dog Network, where we also met up with Dali, a deaf Staffordshire Bull Terrier currently looking for his forever home, and being looked after at Battersea.  This is our second visit to film Karen, and we thank her very much for her time, we are really looking forward to bringing you the first of her articles about the Deaf Dog Network and Living With a Deaf Dog.

From there, we headed on over to see Jez.  Once again we were very impressed at his professionalism and knowledge, he is always a pleasure to film.  Jez completed our December issue with a very detailed breakdown of the potential dangers around the festive period, and what we ought to look out for in terms of our furry friends.  He also filmed another two fascinating articles for the new year, so watch this space!
Posted by Naturally Happy Dogs at 17:32 0 comments 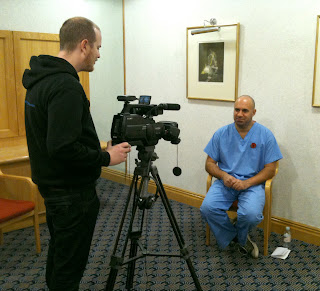 What a great day we had on Sunday, filming at Discover Dogs show in Earls Court, London!  Firstly we met and interviewed Caroline Kisko, the Kennel Club's Secretary, who gave us a breakdown of some of the activities happening across the two days.  This fed into an interview with Faye Moore of the Young Kennel Club (YKC), who explained about the benefits of joining for children and young adults aged between 6 and 24, and talked to us about the team building days that they organise, including Outward Bound and Go Ape.  We hope to bring you these interviews very soon...

Next in front of our camera was Marc Abraham (aka Marc The Vet) who caught up with us in between his very busy schedule of seminars.  He talked to us about an issue close to his heart – puppy farming.  He has started a high-profile campaign called Pup Aid which has attracted the support of a large number of celebrities.  In this article, which we'll bring to you early in the new year, Marc explains how to identify a mass-bred dog, what problems they can come with, and what you can do to help eradicate this terrible practice.

We even found time to catch up with Joe Inglis on Joe's Vets Kitchen stand, very good to see him too!

Wow, time to recover now, and of course loads of editing!
Posted by Naturally Happy Dogs at 20:01 0 comments

Today we visited Jean Adams who has homed two adorable Jack Russell-Chihuahua crosses from the Oldies Club, a rescue organisation that re-homes the more mature rescue dog.
In this fascinating interview Jean talks about her experience with the Oldies Club, why she prefers the older dog to puppies, and also touches on the benefits of fostering.  We very much look forward to bringing you this article in the new year.
Posted by Naturally Happy Dogs at 22:11 0 comments

Jordan Shelley - after The One Show

Today we had the good fortune of meeting with Jordan Shelley, the dog trainer and fosterer made infamous by his recent appearance on BBC's "The One Show".  A furore followed that appearance with many from the dog behaviour and training world up in arms about his use of dominance-based techniques, in particular their use on national television without adequate information about how potentially dangerous they can be.
Many people, faced with the ferocity of opinion against them, would have faded into the background as quickly as possible.  Jordan, however, decided instead to seek the best advice he could get.  Armed with advice from Beverley Cuddy of Dogs Today magazine, and within a week of The One Show airing, Jordan was on a plane to visit and learn from the best – Ian and Kelly Dunbar.
The next two weeks saw Jordan attend the APDT Annual Conference, where he listened to some of the keenest minds in positive reward based training.  He attended Ian Dunbar’s SIRIUS puppy training classes, as well as his Science Based Dog Training (With Feeling) seminar, and spent the two weeks living with Ian and Kelly and their three dogs.
Upon his return, he agreed to talk to Naturally Happy Dogs on film about his experience, what he has learned, and how he intends to move forward with his newly learned techniques.  Please click here to watch this article.
Posted by Naturally Happy Dogs at 22:37 0 comments

Sittingbourne in Kent, and Naturally Happy Dogs are on the road to visit BARF Pet Foods UK, which offers the largest selection of raw foods and supplements available to the UK market.
Whilst the raw food market in Germany, where Managing Director Andreas Dauer moved from recently, enjoys a 30% market share, in the UK it only stands at around 1%.   When Andreas moved to the UK and tried to source some raw food for his Bernese Mountain Dogs, he realised that there wasn’t a huge selection available and seeing an unfilled niche, started his company just over a year ago.
In our article which we will bring to you early in the new year, we hear about some of the benefits of the “Biologically Appropriate Raw Food” diet, how and why supplements can support it, and also how you can move your dog across to it from classic processed kibble.
Posted by Naturally Happy Dogs at 22:10 0 comments

This month we have some great videos including DogLost, Teaching your dog to roll over, an introduction to Galen Therapy, The benefits of Fun Scentwork, Environmental Enrichment for your dog,  Surgery for bone cancer, a look at chain collars and their alternatives and how we can use fish oils to treat inflammation. What a month!
Posted by Naturally Happy Dogs at 16:12 0 comments