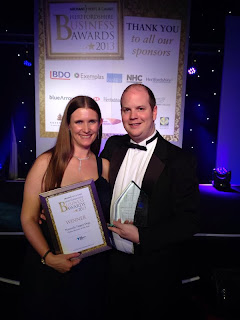 Here at Naturally Happy Dogs we are very excited about being awarded Online Business Of The Year 2013 at the Hertfordshire Business Awards last night.

The past three years has been a long but enjoyable road, and the website has developed and grown over this time, which included seeing us at Crufts and Discover Dogs this year, among a number of other events.

We are really pleased with the articles we have produced so far, we hope you've enjoyed them as much as we have making them, and we very much look forward to bringing you more top content in the future.

We would like to take this opportunity to thank everyone who has helped us get this award, especially to all our contributors, and also to Pauline Rowe, who has worked tirelessly to make contacts, and has recently put a huge amount of effort into the Breed Library.

We thank you all very much and look forward to working with you moving forward.

Best wishes, hugs, and woofs to you all from Kevin and Sally.
Posted by Naturally Happy Dogs at 06:29 0 comments 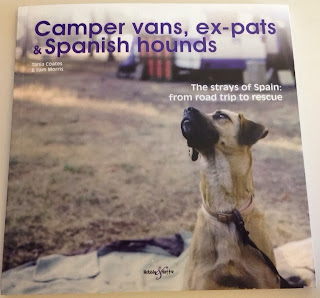 This is a lovely little book about a couple who find and rescue a stray dog on their three day road trip to a family wedding in Spain. Not realising just how much their lives would change, they fell in love with 'Pedro' while trying, unsuccessfully, to find his owners. The book tells the story of how the couple gradually got more and more involved with the organisation SOS (spay our strays) during the process of bringing Pedro back to the UK, and how it didn't take long for them to start fostering and bringing dogs over to the UK to find their forever homes. They now run SOS UK and help many dogs per year through their ever expanding network of volunteers across the country.

The case studies in chapter four introduce some of the dogs they have helped, they give a taste of the horror that some dogs go through, how much people care and selflessly give up their time and energy to helping the strays of Spain, often with no return, and what great family pets these dogs can become. The dedication of Tania and Sam and everyone else involved with the schemes is obvious throughout.

Tania has a lovely gentle way of writing and the book is full of gorgeous photos which really show the personalities of some of the rescue dogs. I would recommend this book to anyone with an interest in Spain, or the kindness of people, or just dogs in general!
Posted by Naturally Happy Dogs at 10:29 0 comments

At Discover Dogs this year we met up with a new group called "C.A.R.I.A.D." who have produced a single aimed at raising awareness of puppy farming. We were pleased to be the first to pre order their CD which is being released on 12th December.

C.A.R.I.A.D. was set up two years ago by Linda Goodman with the express aim of putting an end to the appalling battery breeding of dogs. 'Cariad' means love in Welsh, and the acronym stands for Care And Respect Includes All Dogs. C.A.R.I.A.D. is a small non-profit organisation with a big heart, and this Christmas it has set itself a huge task to reach the Number One Christmas slot with a song specially written by singer-songwriter Mandy Woods.

Aimed at educating the public about the reality of puppy farming, 'Cariad at Christmas Time' was recorded in October at Shabbey Road Studios in Caerphilly, and, like Band Aid's 'Do They Know It's Christmas?' back in the '80s, it's a multi-vocal recording. This time, however, instead of getting celebrities to sing the lyrics, C.A.R.I.A.D. decided to invite a number of smaller dog rescues and charities to put forward anyone among their staff and volunteers with a good singing voice and the confidence to go into a studio and sing their heart out. The response was phenomenal, and on October 5 a group of strangers, some local and others coming from as far afield as Lancashire, Suffolk and Wiltshire, met up at the studio.

Some had professional experience, others simply a love of singing and a commitment to the welfare of dogs. Al Steele, co-owner of Shabbey Road, did a magnificent job of instilling confidence in the group, arranging the vocal parts on the hoof and getting the very best out of everyone, regardless of their age or experience. He also produced the single, and the result is the CD that accompanies this message, that is set to receive worldwide radio air play. The charity single is available to pre-order via download from iTunes or as a physical CD from the website www.cariadatchristmastime.wordpress.com, and the proceeds will be donated to the rescues and charities that helped make it possible, as well as to the C.A.R.I.A.D. campaign.

More importantly, though, the song is aimed at exposing the horrors of puppy farming and persuading people not to buy a puppy at Christmas, especially if the mother of the puppy isn't present. Better still would be to go to a reputable rescue in the New Year and save a life by adopting one of the thousands of dogs and puppies who are waiting patiently for someone to give them a new, loving home.

C.A.R.I.A.D. and Mandy are very happy to be contacted for further information about this very special and vital project aimed at saving the lives of thousands of innocent and suffering dogs.

Ever fancied teaching your dog to read?  Thought it was impossible?  Apparently, it's not, dog Trainer Chris Mancini shows how it's done in Teaching tricks: Reading.  If you'd like to do something a little more active with your dog, we also have a video that gives an introduction to the sport of Disc Dog.

At Naturally Happy Dogs there are times when we can be privileged to witness, and bring to our subscribers, some incredible footage. That is certainly the case in this month's issue. With the kind permission of experienced dog breeder Mike Hollingsbee, we were able to film the birth of 7 Border Terrier puppies, a truly moving sight. But for those considering breeding a litter themselves, Mike has many warnings, it's not always as easy as we might think, as the video shows.

On a more day-to-day level, in this month's issue, we look at: grooming puppies, preparing dogs for air travel and, in two videos, the irritating subject of fleas.  Tanya Leslie tells us about Flea Allergic Dermatitis and Nick Thompson tells us how we can treat fleas and worms naturally.

Finally, on a general interest level, Toni Shelbourne gives us her insight into how a wolf pack works.
Posted by Naturally Happy Dogs at 14:28 0 comments